It’s that time of year again. That horrible time of year  where all those people who don’t leave their new builds for the rest of the year start filling up your favourite pubs. It’s hard to say where they come from and where they hide for the rest of the year but come December you can guarantee they’ll be piling out of their offices in shiny shoes, grey trousers that are slightly too tight for them and, the pièce de résistance, the absolutely hilarious Christmas jumper complete with flashing lights or huge snowman nose threatening to swipe an unsuspecting patron’s pint from the bar.
This sounds a little bit like a dig at the humble Christmas jumper but I assure you it’s not. I’m a big fan of finding a little treat of a Christmas jumper in a vintage shop. I just don’t want to see the same one over and over again clogging up my favourite pub for a month. It’s hard to tell exactly when this started happening, big groups of middle managers laughing loudly whenever another of them walks into the pub covered in tinsel and fairy lights.

The history of the Christmas jumper itself is also hard to unravel. Some sources suggest that the original Christmas jumpers were worn by Icelandic fishermen in the late 19th century. Due to the perilous nature of the work, brightly coloured and unique knitwear meant that it was easier to identify the dead. Whether this  is true or not is a subject of debate but we can trace Christmas jumpers at the very least back to the 60s and 70s. Those Christmas TV specials fronted by lovely grandads, singing, in colourful sweaters. Andy Williams and Val Doonican were early supporters  of the trend.

Then suddenly about ten years ago the Christmas jumper started to trend. Was it the recession giving us something to be cheerful about? Was it the rise of the hipster and their well-documented love of irony? Whatever the reason sales of Christmas jumpers went through the  roof around 2012 and they haven’t really seen a decline since. Lidl have their own Christmas jumpers, Topman and the likes all got on board, even high fashion has had a go at the market. This Dolce and Gabbana number should set you back  a little more than a grand.

Just to take a second to be a Scrooge, it’s not just people coming in my pub when I don’t want them too, there is another major downside of the Christmas jumper fad.  I feel like I’m always talking about fast fashion but it’s something that needs talking about and those cheaply made jumpers are the perfect examples. Made to be worn just once a year, forgotten about the next when there’s another hundred hilarious examples available, they’re destined for landfill in no time at all. On top of that, the majority of them are made from plastics and we all know how much of a tricky little bastard plastics can be.
I’m a bit torn really: I hate the culture surrounding the Christmas jumper craze, I hate fast fashion and the impact it has on the climate crisis, I hate unoriginality (this one’s probably my most hypocritical trait… and I have a few). But what I am into is a stupid jumper, a stupid jumper that I see once anyway. Those ones with Merry Christmas Ya Filthy Animal emblazoned on them bring a little nostalgic chuckle when you first glance at them. Until you notice there’s 300 people stood around you, wearing the same jumper, all laughing maniacally at each other. 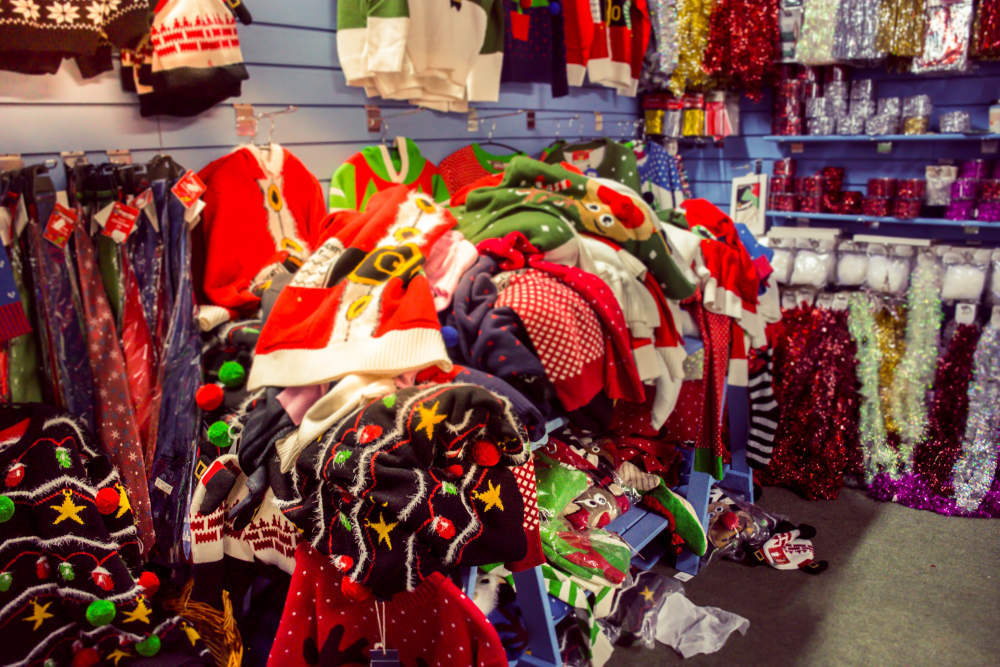 Then there’s the commercialisation of Christmas to think about. I mean personally I couldn’t give a shit, I’ve never known Christmas as anything but a commercial mega fest. I’m far from a religious person and my family like a drink so that defines Christmas for me: good food, loads of booze, and a proper laugh with the people closest to me. The only bit about commercialisation that does my head in is everyone else. Which I’m starting to realise is what does my head in with most things.
Ultimately I think the best thing you can do is trawl through those vintage shops and find a unique gem of your own. I once managed to get a hand knitted terrifying scene of a teddy bear opening a present. I’d still have it now but it shrank in the wash. Find something weird, something a bit confusing, something well made, and then it’s not just for Christmas. It’s for a few different Christmases in a row before you pass it on to someone else.
Share