A firm favourite of the hipster, creator of countless copycats, genius shaker of the art world. There isn’t much that hasn’t been written about Jean Michel Basquiat in the years since his untimely death. The fascination with Basquiat lies, for some, in just that: the death of the rockstar, the 27 club, and there’s no doubt that there’s something morbidly intriguing about that particular age. For others it’s a fascination with his life and the rate at which he developed as both a person and an artist. Then there’s the view on just the art, a difficult thing to separate personal themes in art are intrinsically linked to the artist (see: Death of the Author). I suppose I’m writing about all of that in an attempt to understand both the art and the artist.

Basquiat came around at a vital time in New York, a New York ridded with crime, junk, and depression. The city was run by dealers and pimps, inhabited by the lost, and would be the canvas upon which a 17 year old Jean Michel Basquiat would throw himself. After running away from home several times Basquiat finally did it for good in 1978, joining the downtown set and sleeping on floors. The walls New York were plastered with tags, graffiti was dominating the scene, hip hop was taking form. With Basquiat’s arrival came a buzz and a whispered question: who is SAMO? 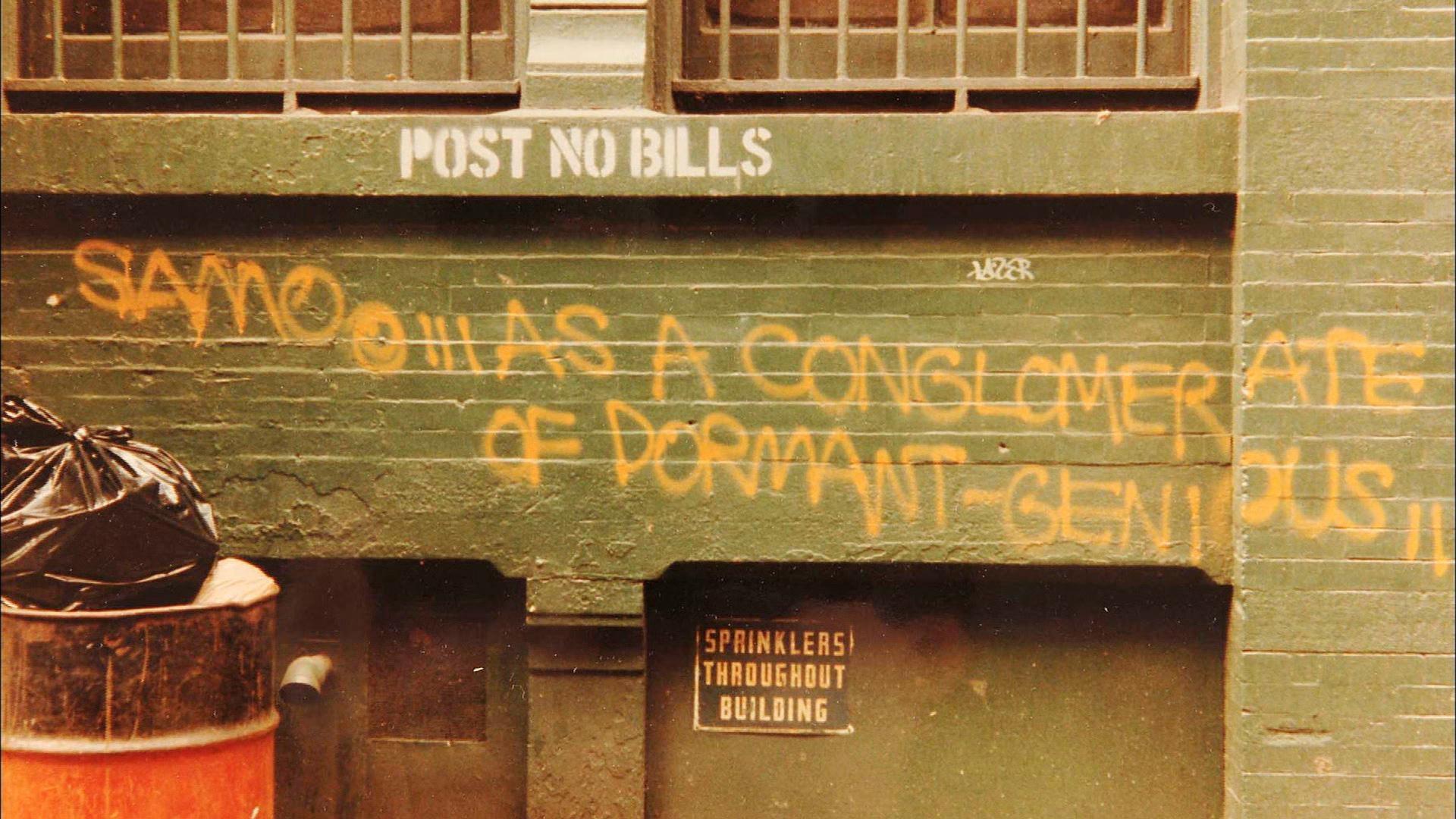 Amongst the art and the tags the local set started to notice poetry. Little snippets of philosophy or nothingness set amid the chaos. “SAMO FOR THE SO CALLED AVANT GARDE” another little nuggets were popping up on walls, enough so that the Downtown 500 started to take notice. The Downtown 500 was a loose collective of artists and fashionistas who made up the thriving NY scene and they were ready-built to take the teenage Basquiat under their collective wing. Attending an infamous Canal Zone warehouse party was to be Jean Michel’s official introduction to the Downtown 500 and eventually the world.

Introducing himself to the party organiser as SAMO, Basquiat asked if he could do some graffiti in the warehouse. Perfectly scrawling “Lee Harvey Oswald / Coca Cola / General Melonry / SAMO” on the wall, the crowd would erupt at the final name. The people of the city had been seeing this name pop up over and pop over with political, social, and abstract messages. They’d been talking about who it could be, each of them knowing each other in some way. Now here was SAMO himself, in all his enigmatic, beautiful glory. 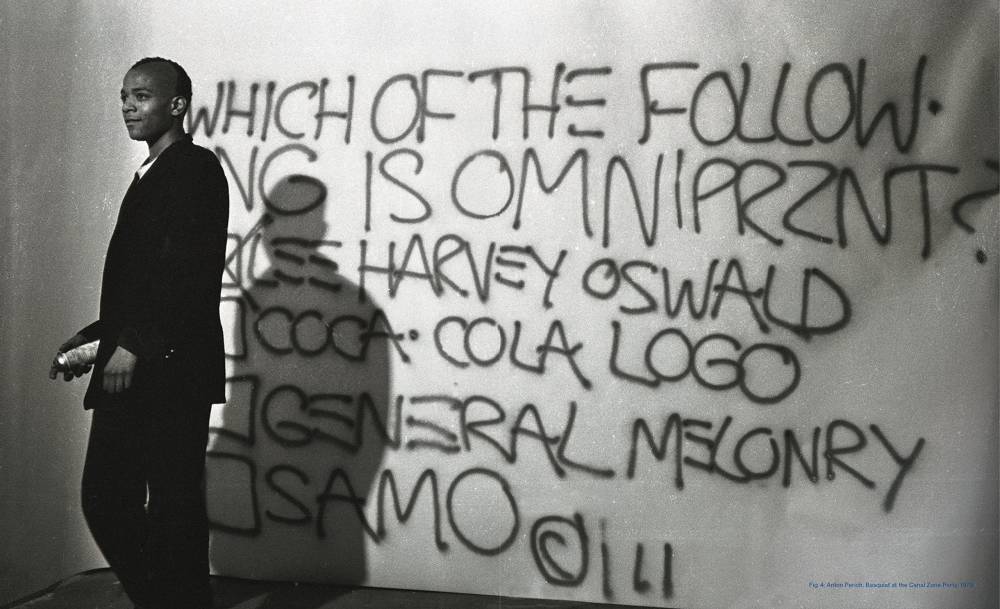 Despite the instant recognition Basquiat still had nothing. Nothing but some local admiration and a few new floors to sleep on. He was jumping trains, finding money on club floors with the rest of them. Basquiat always knew he had something, childhood friends described him as always wanting to be famous but it needed some encouragement to get him there. Fab 56 Freddy  and others around him finally convinced Jean Michel to try and capitalise on his art. Basquiat started to sell postcards and t shirts locally which is when he first got some celebrity status: Debbie Harry bought a painting for $200.

This was probably then most money Basquiat had ever seen and it went just as quickly. Without any money  to buy supplies and refusing to bow down to life with a  stable income, Jean Michel began to paint on whatever he could find around the streets of New York and he was quickly becoming a rising star. Associating with then hippest crowds, being seen at the coolest places, it wasn’t long before Basquiat was part of an upcoming show at Times Square alongside friend and other hot topic Keith Haring and art curator Diego Cortez. 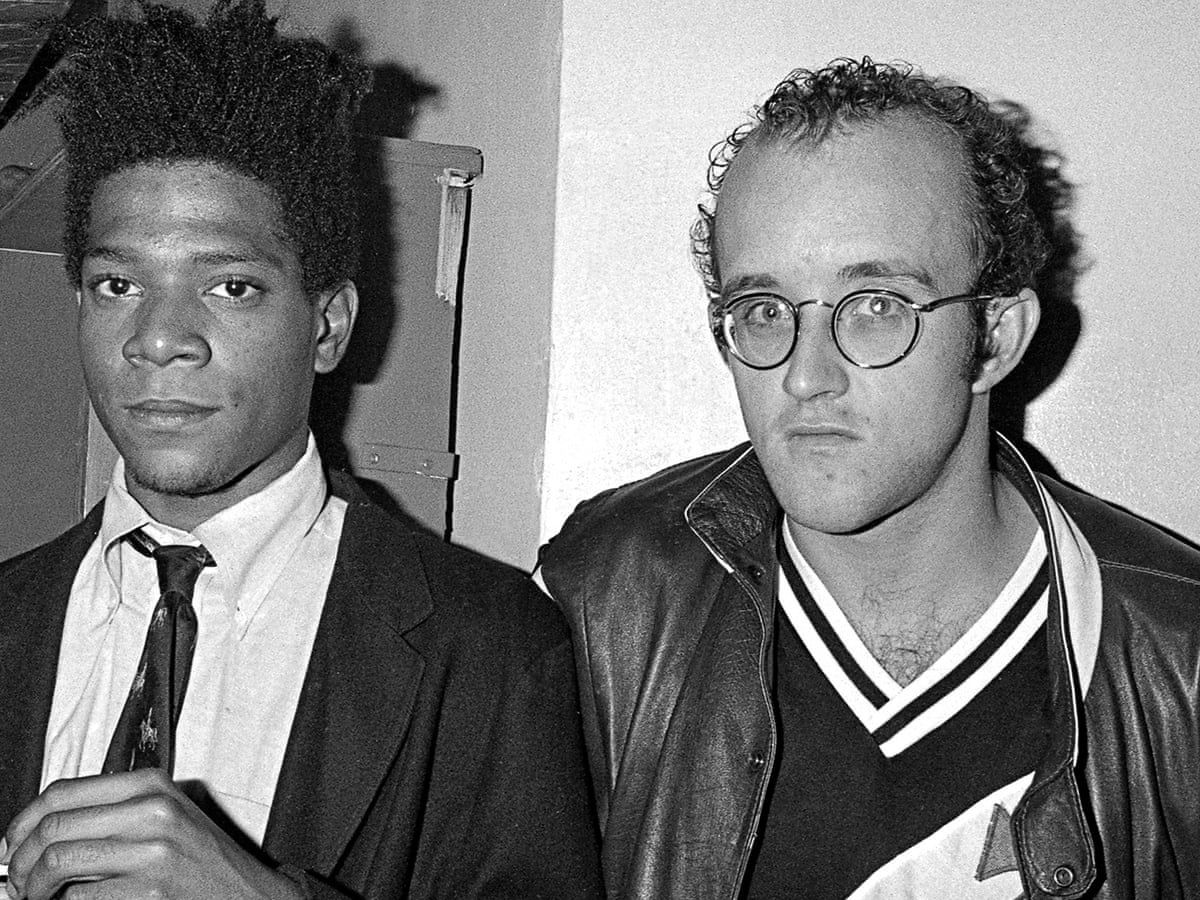 In Cortez’ own words, he was “sick of seeing white people, white walls, and white wine” and so proceeded to give Jean Michel an exhibit at the PS1 Arts Centre. With the seventies being all about minimalism this teenage African America’s creations were looked on with wonder. Basquiat was slowly becoming exactly what he knew he’d be. He secured his own first studio in Annina Nosei’s gallery basement where she also gave him his very own exhibition. Every piece sold in one night. People didn’t know what to make of Jean Michel but they clearly liked what he did.

“I don’t know how to describe my work. It’s like asking Miles why does your horn sound like that”

Trying to understand the work of any artist is a mission in itself. The artists intent is often  so far removed from the audiences interpretation that they could be analysing two entirely different works. Basquiat liked noise and distractions when he worked, his influences came from jazz, be bop, broken down melodies and harmonies reflected in his vast body of work. This fast-paced style of creation meant that by 1982 Basquiat was out of the basement and into his own large loft space, from street artist to renowned star of the NY art scene. He’d worked up at such a rate it’s hard to believe he was just 21 by this point.

Moving to New York at seventeen, with nothing to his name, just four years later Jean Michel Basquiat was exhibiting at the Gagosian Gallery, bringing with  him shock and admiration. The exhibit sold out before the doors had officially opened and the doors were officially open to the world. Exhibits followed around the world from Rome to Zurich to Tokyo. The street punk was now the darling of the art world and had all the trappings that come with the title. 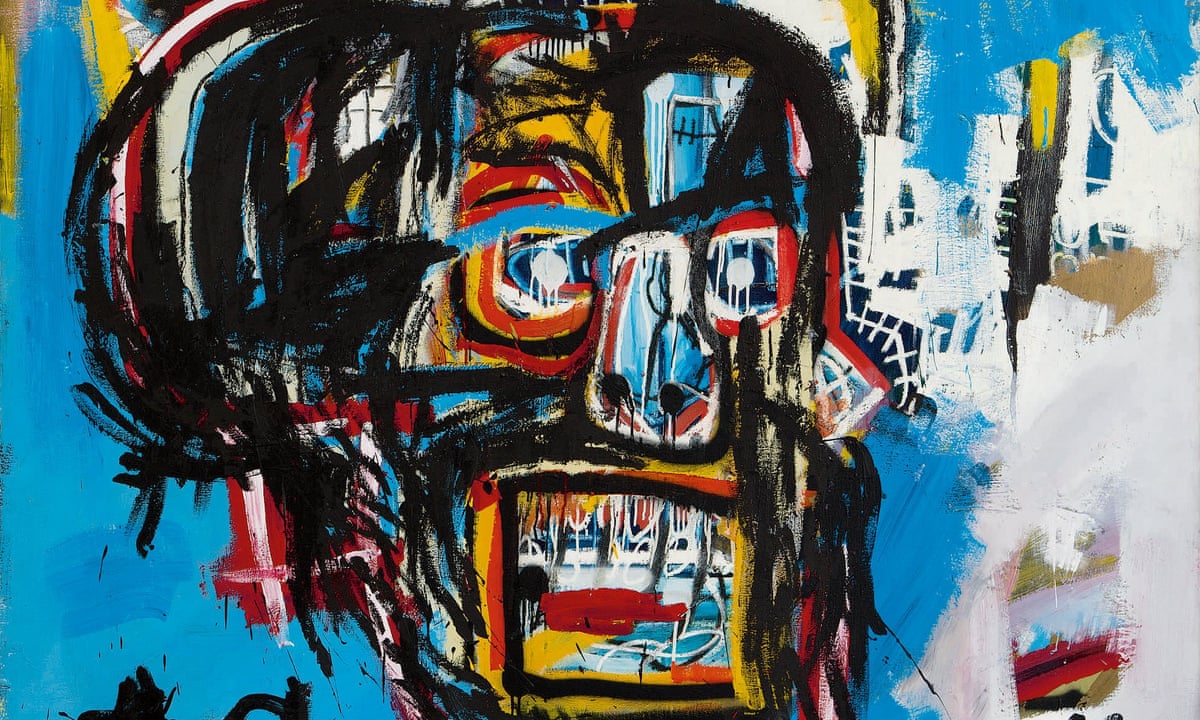 Basquiat original’s had rocketed in price. At 21 he could sell paintings at $30,000 a piece and he was producing them at an astonishing race. Considering he would pass away just a few years later, Jean Michel managed to leave behind literally thousands of drawings and paintings. The sudden plunge into wealth didn’t sit right with Basquiat, he became more awkward, leaving cash around as he didn’t have a bank account. Thousands of dollars stuffed in unread books and under sofa cushions.  The way it did sit right was that, in his own words:

“I was happy I was able to stick it out. I feel like I was right.”

It wasn’t long before New York Times came knocking and he was their next cover star. A young, good looking, black American making huge waves in the art world would turn him into a rock star. An affair with Madonna was that next step to proper celebrity status. He would even soon become very close friends with Andy Warhol. But  even through all of this he was still viewed as somewhat of a curiosity from the underground. Floating somewhere between street artist and esteemed painter. 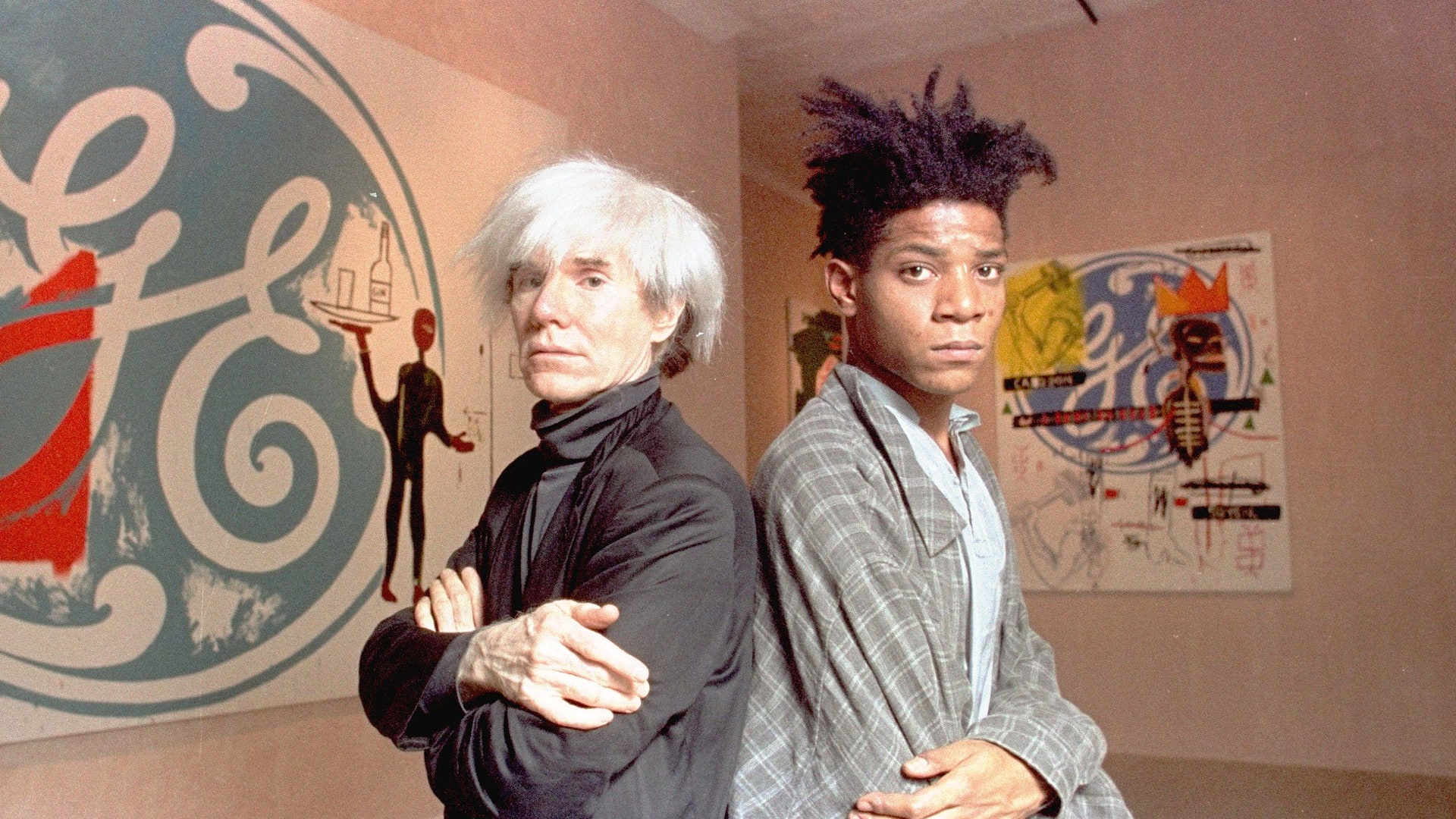 Basquiat felt that racism held him back, especially as his friend Michael Stewart had recently been killed by five white police officers whilst graffitiing on the subway. There black  experience started to feed into his work and his mood and aesthetic at the time was punctuated with a hardness, an edge, and a hint of paranoia. Sudden money at such a young age can do this to a person, add to that you’re a black man in America and in a predominantly white field and you’ve got a dangerous mix. All of these things were leading Jean Michel on a dark path.

By 1985 all of Basquiat’s friends were worried. He’d started using heroin regularly in an attempt to concentrate on his art and presumably to block out the loneliness that came with stardom and adulation. Basquiat also said at the time he was ‘always worried about the past’, where once graffiti covered the past it now seemed heroin would do the same. Now one of his closest friends and equally worried, Andy Warhol decided on a collaboration between the two. They teamed up on a number of works and opened an exhibition. The new star colliding with the old.

The exhibition was panned by critics. Basquiat was described as Warhol’s lap dog which sat heavily with Basquiat, as criticism often did. He also felt the racial element to what was being written about him and continued to become more withdrawn . He and Warhol wouldn’t speak again, Warhol passing away in 1987 without the two ever reuniting. If there’s one thing to get a user back further into addiction it’s regret.

Jean Michel would have one further exhibition in 1988, the year that he would finally succumb to his addiction. Friends and critics have described these final pieces like the work of an artist coming to the end. Basquiat certainly felt the pressures of that bright burst of a career and managed to traverse some peoples lifelong journey in not even ten short years but the legacy he left behind, physically and mentally, will continue to reverberate for years to come.