I’ve discussed fast fashion here quite a bit, particularly its impact on the environment, but I thought I’d dig a bit deeper into a few of the most popular ones to see how bad they really are. Turns out, shockingly, these massive businesses are actually absolute bastards. Not only are they affecting the future, they’re affecting the present through shady dealings, employment law violations and, in some cases, modern slavery. Who’d have thought multi-million pound companies would act in such aborrhent ways? That’s why I order all my stuff from trustworthy, family-owned companies like Amazon.

Anyway, here’s some bastards and just a small fraction of the shitty stuff each of them has done:

SheIn are right fuckers. Like proper dickheads. Overtaking fellow bastards Zara as the most popular fashion brand of 2022 by offering dirt cheap clothes in a climate where people don’t have much money.  You know who haven’t got enough money to buy their poor quality clothes though? The people who make them. SheIn state that they “believe that people deserve a living wage” without anything in the way of backing up that claim. In fact they’ve continually refused to release any information about their pay and working conditions. In one study by Public Eye, a researcher found workers in China doing over 75 hours a week, stood on their feet, with only one day off a month. They also found that workers are paid per item, the amount depending on the complexity of the design. No wonder they don’t release their working practices. They’ve also consistently been accused of stealing less-famous brand designs. Oh, and they tried selling swastika necklaces too. 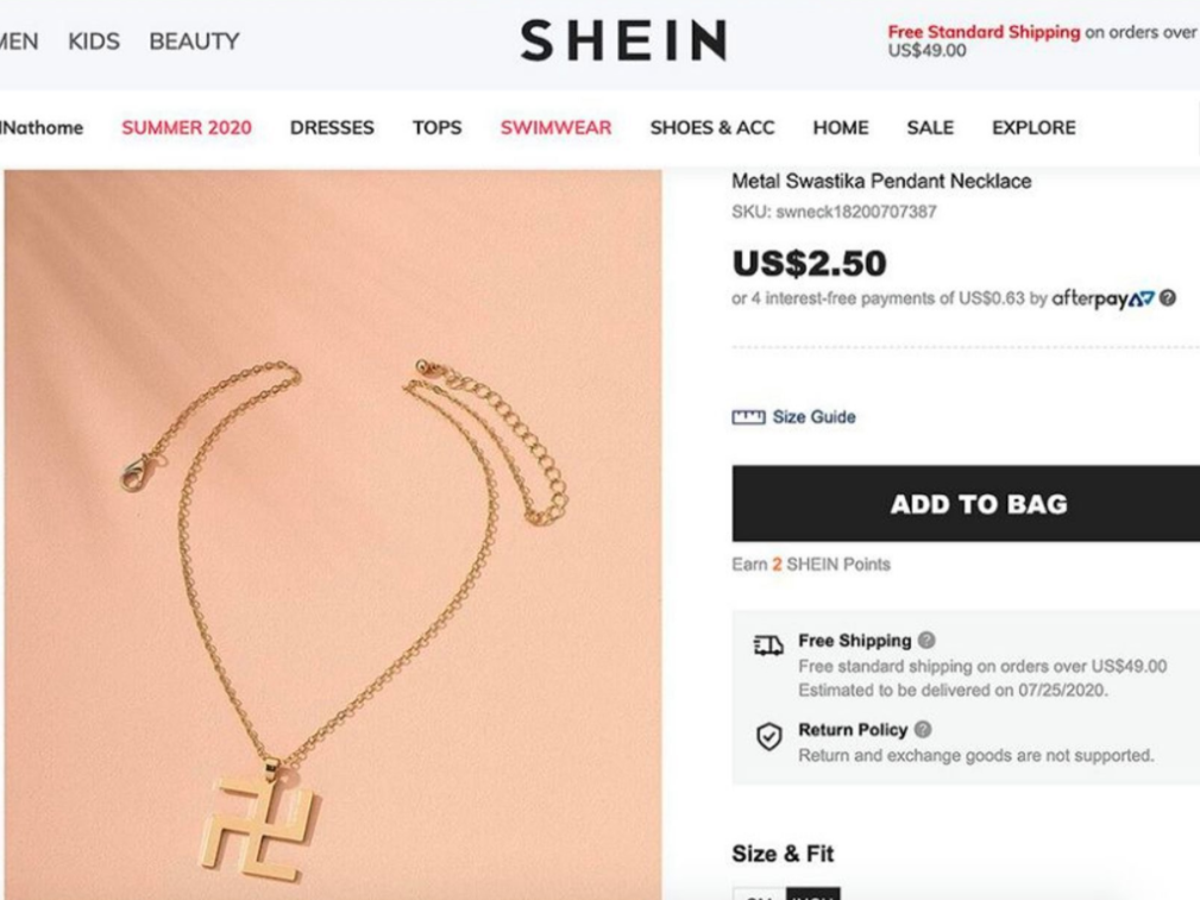 Boohoo have exhibited some really shitty behaviour. Literally. Shopper Emily Green posted a picture of her Boohoo order online, well specifically one item: a shit-stained Primark thong. Emily isn’t even a one-off: Tiegan Mayo is another Boohoo  shopper who  posted pictures of ‘skid marks’ she found in a white playsuit. Looks like Boohoo are not very rigorous in checking their returns before they restock the items. Who’s getting shit on something before returning it is another question but let's just focus on these bastards for now. Worse than that though is, once again, the conditions in which workers find themselves. An undercover reporter for The Times found a Boohoo factory in Burnley with no windows, temperatures of 32 degrees, and workers walking over 13 miles during a shift. Add to this timed toilet breaks, ill-fitting safety equipment, and allegations of sexual and racial abuse, and you’ve got yourself a proper modern-day Victorian workhouse.

As I said earlier, SheIn overtook these fuckers as the most popular fashion brand of 2022 and it seems to get that title you really do have to be absolute fuckers. Also just like Boohoo they decided to incorporate a swastika into one of their designs; this time a nice floral bag with a couple of swastikas thrown in. Presumably trying to one up their competitors in the antisemitism stakes they then went on to produce a line of blue and white striped t shirts with a yellow star on the breast. Just like the uniforms Jewish people were forced to  wear in concentration camps during the Holocaust. Like their other competitors they’ve also faced numerous lawsuits relating to stolen designs from people they probably assumed wouldn’t notice or have the balls to say anything if they did. BBC News also uncovered a load of allegations of dodgy labour practices including, but not limited to, child labour and exploitation. Zara really went for the full house of shittery.

I’ve talked about these lot loads, particularly their tendency to greenwash and go on about sustainability which they don’t practice at all really. Much in line with their employment policy which they promised to improve yet so far have been unable to prove they offer a living wage across the board. These aren’t their only issues though, in fact far from it. There’s definitely a pattern emerging here as Zara also dipped their toes in the old racist-wanker waters. Their decision to use a black child to model a ‘coolest monkey in the jungle’ led to widespread backlash and they bravely appointed their first leader for diversity and inclusiveness. Despite this major move they still managed to circulate an internal memo labelling a beanie hat they were selling with a racial slur. Nice one dickheads.

Amazingly Urban Outfitters went and got the same inspiration as Zara did: the holocaust. They decided it would be a great idea to sell a grey and white striped tapestry with a pink triangle on the front. The symbol that prisoners were forced to wear so they could be identified as gay. They  also had an item on their website whose available colours included ‘Obama Black’. Not stopping there they decided it would be a great idea to  sell a version of Monopoly called Ghettopoly which, as you can imagine, contained a whole host of racial stereotypes such as ‘Hustle’ bonus cards and streets with names like ‘Cheap Trick Avenue’. You can also add in a sprinkle of paedophilia as American model Hailey Clauson’s parents sued them for featuring a sexualised image of their then 15 year old daughter on a t-shirt. One more thing: they’re also art thieves like the rest of them.

I’m pretty sure we all know by now you can’t knock out the amount of cheap shit that Primark do without some suffering along the way. Despite claiming to have bettered their policies, they (shock) do not seem to be acting on them. They didn’t even bother to pay the minimum wage here in the UK: after deducting pay for staff uniforms they  were found to fall below the legally required minimum. This poses the question of how little were they paying in the first place if those shitty uniforms took them below the national minimum? It’s not just here were they like to exploit people either. Workers in Myanmar were reported to have been locked in Primark factories to prevent them from leaving after long gruelling shifts. That’s probably one of the reasons people keep finding ‘HELP ME’ and ‘SOS’ labels sewn into Primark clothes.

After going through some well deserved troubles, Missguided were saved by heroic dodgy fuckhead Mike Ashley. Presumably as part of an inclusivity program Missguided don’t just exploit overseas workers. Channel 4 found that they were paying factory workers in Leicester between £3 and £3.50 an hour which is less than I got for doing a paper round in the nineties. Don’t worry they exploit overseas workers too as they follow suit in a complete lack of transparency regarding their labour practice which has been labelled as ‘very poor’ by ethical research groups. They didn’t just stop with employees though as a few years back they decided to sell hunger busting pills on their website. Saving money by exploiting employees then exploiting customers insecurities by advertising ‘skinny pills’. That’s really going full circle with your capitalist fuckery.

Online giant Fashion Nova are such phenomenal fuckers that they were the focus of a US federal investigation. The investigators discovered that factory workers for Fashion Nova in LA were being criminally underpaid. It’s nice to know that all these fuckers exploit globally and don’t just target one country. Instead they choose to target deprived communities and groups. They don’t just exploit though, they mislead and straight up lie. As with most fashion chains Fashion Nova are no stranger to Photoshop: they were called out for using size 2 models to promote their ‘plus-size’ range. That would be the same plus-size range of clothing which ‘promotes’ body positivity.

Hopefully by now you’ve seen the pattern I pointed out in the intro: they’re all absolute fucking bastards. I could go on about Victoria’s Creepy Secrets or Forever 21 being sued about 50 times for plagiarism over their designs but ultimately I’d be saying the same thing about them all. They have no regard for people, the environment, or even the quality of their product. I haven’t even touched on half of the shit these fuckers have done but just the bits I’ve touched on should make you think twice about touching them. The cheapest clothes simply aren’t worth it.